Stabro AG with a team of 10 employees is a Swiss company which has invested in an automation solution from the Dutch company BMO Automation BV (Swiss representation: Mikutec GmbH). The robot provides a DMU 60 EVO 5-Axel CNC machine with raw materials. The robot cell can be used to manufacture small batches of high quality and creates a reliable process also for the weekends.

“At the moment it is no longer enough to produce unmanned during the week at night. We, as Stabro AG, also have to be able to manufacture unmanned with up to 72 hours during the weekend. We have invested in an automation solution from BMO Automation to fulfill those challenges.”

The above quote comes from Marcel Dietsche, owner and CEO of Stabro AG. He learned his profession of polymechanic from scratch at the company Saurer (truck construction). With the latest investment in a flexible automation system from BMO Automation BV, Stabro AG is relying on an automation solution from the international award winning Dutch manufacturer. To be exact the type of automation in which Stabro AG has invested is the so called Titanium 180.

The strengths of Stabro AG are milling of cubic sized workpieces from fist sized length up to 600 x 700 mm. Materials such as aluminum, steel, chrome steel and plastics can be processed. The focus is to produce individual parts up to smaller series between 10 to 30 pieces. Mr. Dietsche:“A batch size with 100 workpieces is almost a large series for us.’Stabro AG delivers products to different sectors, for example, the automotive industry, railways, aviation and medical technology. Most of the customers come from the Eastern region of Switzerland. But they also deliver to foreign countries like America, Poland and the Czech Republic.”

Mr. Dietsche is particularly proud of their customers in Eastern Europe:“This proves that Switzerland can be absolutely competitive, not only due the price we deliver but most essentially due to the know-how we have. We definitely have our own strengths here in Switzerland. The price also have to be right. But we need to invest in the automation of our CNC machines.”

Because of the small batch sizes production needs to be extremely flexible. Due to the increasing cost pressure the utilization of the spindle running times need to be maximized as well. Mr. Dietsche: “Large series can be realized relatively easily. However, for a long time, in my opinion, there were no solutions for single-part production and small series in a good price structure and were economically viable. This has been put into perspective with the BMO Automation solution.”

Michel Minikus (CEO, Mikutec GmbH):“ That is the key word: a flexible automation solution with a good price structure. This balancing act is achieved with the BMO automation solution. That is also the reason BMO Automation received several industry awards. The concept is designed in such a way that both pallets and raw materials can be handled by the robot and their installed grippers. In addition, the drawer with the raw materials has one or more presetting spaces (modularly expandable), on which the raw materials and finished parts can be loaded or unloaded parallel to the machining time. This not only applies to the main spindle time, but also when the robot grips the parts, the presetting of the product drawers can be operated.”

Operation of the robot: As easy as a toaster

Baton Kuqi (Production Manager Stabro AG):“The operation of automation systems is always crucial. Ideally, such a system should be as easy to use as a toaster. Well, that may be too much to ask, but I have to give my compliments to BMO for the way they made the system so easy to use.” Mr. Dietsche add:“Even I am able to reprogram the system for a new series and range of workpieces. And I am not even working with the system every day. This is crucial in a Small and Medium Enterprise like we are. For example, if the responsible employee fails due to illness or vacation, all other colleagues are able to operate the BMO system.”

Mr. Minikus:“The Dutch developers knew exactly what was in demand on the market. And they know that simple operation is one of the highest needs within production factories. Of course, everything else has to fit as well like, process security, size of products, cost structure and software interfaces. A simple operation is essential. Anyone who know how to use a smartphone is able to use this system.” Mr. Dietsche confirms:“When I need to program a new small series into the system it would take me five minutes. Our machine operators do it even faster. This is really important. You don’t have to program the whole robot, it practically does it by itself. The operators couldn’t program the robot by their selves, they know how to optimally design a CNC program. These are their competencies and this is where BMO Automation fits very well. This cannot be done any better.”

The Titanium 180 is a flexible automation system with high capacity for automatically loading both raw materials and pallets in large and small series. Even in the standard version, several different product series can be loaded automatically without intervention of any operator. At Stabro AG, both pallets and individual raw materials are stored into the system. The individual parts are simply inserted on the product drawers. With the help of a grid plate, on those products drawers, the parts can easily be positioned.

The Titanium 180 can be provided by a total of seven product drawers. Stabro made the choice for a system with six product drawers for loading individual parts. A seventh drawer can eventually be added. All other parameters are entered via the software control. In addition, Stabro AG has a capacity for 38 pallets (395×395 mm each) which can be loaded into the machine by the robot. Those pallets will be loaded on a zero-point-clamping system. Larger and heavier workpieces weighing 15 kg or more are typically clamped on pallets and are not suitable for the gripper.

On the question if the system can also work with a tension tower Mr. Michel has the following answer:“Generally tension towers can be integrated into the system. The automation solution is designed accordingly. But it has to make sense to integrate tension towers.” Mr. Dietsche:“I can explain you something from our experience. We are already using clamping towers at a horizontal CNC machining center. This is quite interesting in order to process several components efficiently. But with our BMO system, tension towers make no sense. Because with a clamping tower, every workpiece has to be clamped manually, which means more or less effort. What we would have to do manually on the tower is done fully automatically by the BMO system and the machine tool with an automated clamping vice. That is an absolute strenght. Nevertheless, there may be applications where tensioning towers may be required, including in the BMO system. But with a vertical center like the one we use, that’s clearly out of the question.”

After adapting the sixth side of the product the robot will put back the finished workpiece on the drawer. One after the other. Even when employees are free during the weekend. This turning station is a really brilliant solution.

The automation system has a 6-axis articulated robot arm. Whilst the gripper is a modified Schunk standard gripper that, thanks to a BMO extension, has a large span of 0 to 250 mm. This means that both smaller and larger workpieces can be loaded with one and the same gripper. The system is also equipped with grippers for deformed and round workpieces. This means that there is a production solution for loading many different forms of workpieces. The standard Titanium 180 is equipped with a robot which can handle workpieces up to 180 kg, special solutions go up to 500 kg.

Finishing can be done easily

Mr. Minikus: “With the help of a turning station the so called sixth side of a workpiece can be fully automated. Here’s how it works:

Mr. Kuqi adds:“After adapting the sixth side of the product the robot will put back the finished workpiece on the drawer. One after the other. Even when employees are free during the weekend. The turning station is a really brilliant solution.”

In order for the unmanned automated production of different small series to run smoothly a few additional conditions must also be met. These conditions have a very central role. Mr. Dietsche:“For most of the milling and drilling tools, we need sister tools which can be replaced as soon as the tool life is reached. The DMU CNC machine has 120 tools, which has proven to be sufficient for automated production.” In addition, the chip flow must be guaranteed. At the moment, this works with a trough over the weekend. However, this depends on the chip volume. The chip disposal must have enough volume to fit the amount of chips. In addition, we lower the cutting values for the unmanned shifts. One can go to the limit of a tool performance with manned shifts; with unmanned shifts, process safety is a top priority.

Additional CNC machine can be integrated

The future is also in mind, as Mr. Dietsche confirms: “We are planning to integrate another CNC machine with the BMO Automation system. We could integrate another CNC machine manufacturer easily. The automation solution from BMO are developed to be CNC brand independent in terms of interface. This enables us to increase productivity even further. In the future there will be no more machine investments without an automation.” 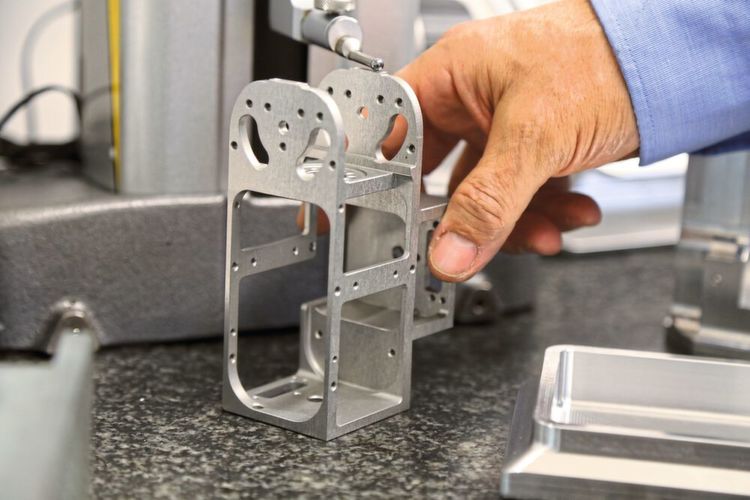 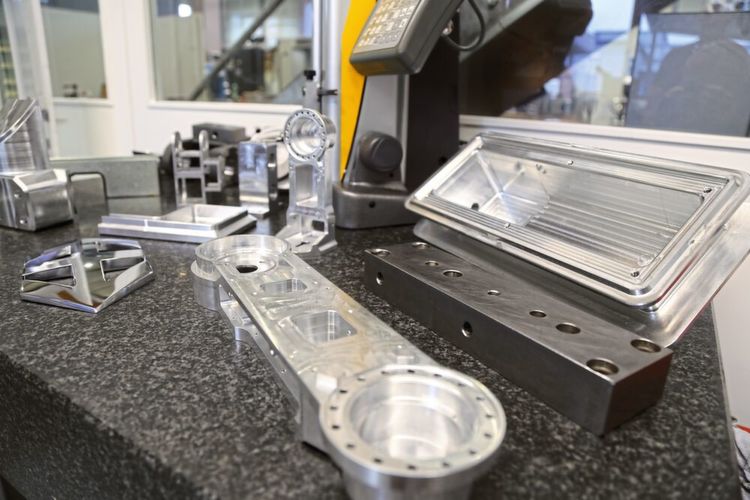 A range of workpieces produced by Stabro AG.

The 10 strong employees from the Swiss manufacturing company Stabro AG was taken over by Mr. Dietsche in 2009. Since then he has been continuously investing in machinery and automation solutions. Mr. Dietsche is trained as a mechanic at Saurer. He learned in the work field of Saurer truck production and switched to assembling textile machine construction. Subsequently, Mr. Dietsche invested in various advanced training courses and has taken on leadership positions in the industry since. 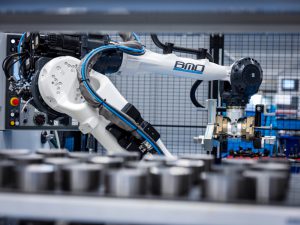 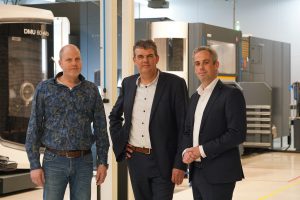