At GTA, six robot cells from BMO Automation ensure that the machines can continue unmanned production at night and on weekends. The sixth robot cell was recently delivered. It loads two toothing machines, a Modul H200 and H400. This gives GTA a lot of flexibility in unmanned production and lowers the costs. Choosing BMO Automation has another benefit for GTA at a time when skilled labour is scarce.

GTA doesn’t only deliver precision engineered components. The factory in Someren also makes gear wheels. And for a number of customers, the employees assemble the parts and gear wheels into subassemblies or even finished drive systems. Paul Hoeks, general manager, doesn’t shy away from the challenge of taking on new technology. During the financial crisis of 2008/2009 he invested in unmanned production with a robot from BMO Automation. ‘The first one that BMO delivered’, he says. There was little work at that time. But a lot of time to learn about the ways a robot can be used. 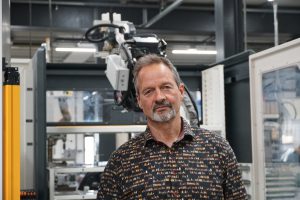 Paul Hoeks at the Platinum 50 robot cell from BMO Automation connected to the MAZAK Integrex J-200S machine. The job manager automatically changes the job on the machine so it doesn’t stand still when a job is finished.

This robot, which is still in use, laid the groundwork for the rollout of automation at GTA. The second robot cell from BMO Automation is connected to a MAZAK Integrex J200. Ninety percent of the time this machine is running a fixed product family in different sizes. ‘Occasionally, we let the machine-robot combination make other products.’ The third BMO robot is also attached to a MAZAK Integrex, in this case a J-200S. GTA combines product loading with bar feeding on this machine. ‘Everything that is smaller than 70 mm in diameter is made from rod. Products that aren’t allowed to be damaged are unloaded by the robot – otherwise they’d just fall into a container.

The robot loads everything that is bigger than 80 mm in diameter into the machine. These pieces are too heavy for bar feeding’, explains Paul Hoeks. ‘With BMO’s job manager, the cell can automatically switch to another product series. The self-adjusting gripper ensures that a wide range of product sizes can be continuously loaded.’ The possibilities are endless: product handling; supply through the bar loader; removal – or not – by the robot; transfer to the sub-spindle to machine the rear; removal by the robot from the sub-spindle. The double gripper takes the round parts out of the machine with the three-point gripper, and the cubic parts with the two-point gripper. Exactly as Paul Hoeks envisioned it. ‘I want the flexibility to do anything at any time.’

Over the years, GTA has produced a lot of products on a total of six MAZAK Integrex turning/milling centres. Step by step, these multitasking machines are now being replaced. The six original machines will be replaced by only three new machines. Recently installed machines include a new MAZAK VTC 530 c, a 3-axis machining centre where BMO placed a fourth bar with pneumatic clamp on the table and has added a Platinum 50 Frontloader robot cell. BMO Engineering built this fourth bar to GTA’s specific requirements. BMO Precision Parts made all of the mechanical components. This collaboration enables BMO Automation to design customized solutions in a relatively short time.

Paul Hoeks: ‘Our milling work was too expensive because we hadn’t automated the milling machines. By automating the new machine, we increase the efficiency and decrease the load on the Integrex.’ This frees up capacity on the Integrex for more complex products that are best made using the turning/milling technology. When you make cubic parts from round material on a multitasking machine, the vertical CNC milling machine needs a second fixture, which adds cycle time and requires more material. Automation also enables you to use less advanced CNC machines for suitable products. That’s why GTA recently placed the fifth BMO cell at the new MAZAK Quick Turn 200Y turning machine with Y axis and driven tools. This combination will also take over part of the Integrex’s work. 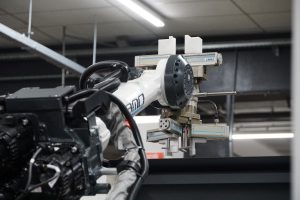 BMO Automation’s double self-adjusting gripper adds more flexibility to the removal of both round and cubic parts.

In the summer of 2021, GTA put the sixth robot cell from BMO Automation into operation. It’s connected to a Modul H200 toothing machine on which GTA mills gears with a maximum diameter of 200 mm. By the end of that year, a second toothing machine will be connected to this robot – a Modul H400 for gears up to 350 mm in diameter. BMO Automation will add a gripper changing station in the cell so the robot can load gears between 180 and 350 mm in diameter. The BMO job manager sends the jobs to one machine or the other. If you have to produce a very large series, the robot can even run one job on both machines and reduce the lead time even further.

For GTA, this is the first automation project in the gearing department. About the choice for a Platinum cell from BMO Automation, Paul Hoeks says: ‘We could have integrated a ring loader with tool changer into the toothing machine. But you’d have to buy one for every machine. In the end, you’d be spending more money and losing space on the shop floor. We thought one robot cell that loads both machines was a better solution.’ In a test, BMO Automation has shown that this solution is feasible. The main focus of the test was the accuracy with which the BMO robot places the workpiece on the Hainbuch mandrel. The workpiece must be perfectly positioned; it cannot be misaligned.

BMO Automation’s robot loading systems distinguish themselves in terms of precision due to their accurate calibration. GTA will randomly mill several batches of gears in the automated gear cell. Because the cycle times in the two machines are different, the algorithm in the BMO job manager automatically determines the best settings. The job manager uses the cycle time of both machines to determine which machine is loaded first. The correct gripper is selected for this. If the operator saves the job, the job manager will be able to pull up the associated cycle times for a repeat order. Even if a completely different job is running on the other machine, the software immediately determines the best settings. 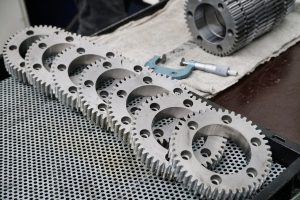 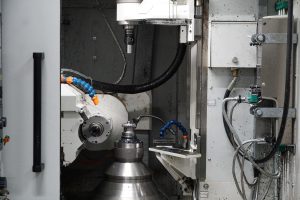 Why BMO and MAZAK?

Apart from Modul’s toothing machines, GTA’s machining hall consists solely of MAZAK CNC machines and robot cells from BMO Automation. This was a conscious choice that is mainly related to the way GTA works. Paul Hoeks: ‘We work with a cafeteria plan within the unsocial hours model. Every three months, employees choose their working hours for the coming period. This choice has to be good for everyone: profitable for the company, good for the employees. The technicians determine together how they meet the planning for the next three months. The planning is then frozen.’

In the evenings and on weekends, the CNC machines with BMO robots run unmanned. The experienced CNC employees, the ones with competence level A, then return to change over a machine, fix a malfunction, or reload a robot cell for the next series of unmanned production hours. This is GTA’s employee loyalty programme for which employees are offered an attractive incentive. And this is the reason why Paul Hoeks sticks with one brand. This means that the employees can be deployed flexibly and that they can operate all of the automated production cells. ‘We don’t have to train employees for different systems and machines. Because every product has already run once, the experienced employees can quickly change over the machine and load the robots. I call this shunting. This enables us to run even more hours on the automated machines.’ 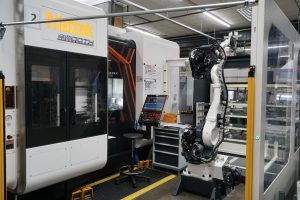 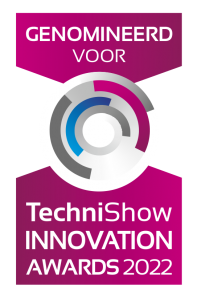 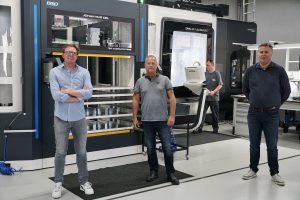